Review of Antony & Cleopatra by William Shakespeare performed by The Masque Theatre at Abington Park, Northampton

August 01, 2017
Unless you are one of the gold chain rattling members and higher echelons at the top of The Globe theatre and planning on evicting your innovative artistic director, the good old Bard is currently rife for exploiting in setting, gender and dynamics of theatre, and for me perhaps he should be. It is not as if after 400 odd years there haven't been enough opportunities to see "pure" Shakespeare.

Hence why long before I made my way to see Masque Theatre's production of Antony & Cleopatra this week at Abington Park museum, I was already pretty excited to see it. The very reason is that having had the privilege of seeing female Malcolm's and Richard II's in the last few years via the University of Northampton shows, a nicely split gender balance from this show thanks to innovative casting by director John Myhill was on the cards. Throw in a bit of Mike Oldfield to open proceedings and you are going somewhere to alleviate my occasional pain of watching Shakespeare.

Not that this production would upset the purists too much though, as while some followers are indeed grunting and being butch females, the production does maintain quite an air of traditional about it. Maintaining the original setting and looking absolutely the time thanks to the dressing work of Clare Brittain and Pam Mann, this is definitely on the Egyptian Nile circa 30BC. Not that you would pick that up from the set though, as other than the lovely Egyptian paintings by Simon Baird (plundered from Playhouse Creatures), this is minimalist, black box staging. Created through time constraints rather than planning, it still works, allowing the actors to act while dealing with a set consisting mostly of just boxes, placed here or there depending on play location.

Leading the cast are of course Antony (Matt Fell) and Cleopatra (Bernie Wood) and what a sparkling decision of a casting it is. Matt, I haven't seen enough on stage over the years I have followed the local scene, as often he has been hiding in the director's chair, however here he takes centre stage with a wonderful creation of the doomed (not much of a spoiler there) General. What he and Bernie form during the play is a real relationship full of the love and hate in a sparkling way, but obvious (full-on) love for each other. Matt also brings a surprising lighthearted put down to a few of his exits, which are a delight and add much to the performance.

As for Bernie, I have never hidden my thoughts of how brilliant she is as a stage presence in past reviews, but always felt that there was so much more to give, if the role was handed to her. Therefore there is no way I can thank director John Myhill more than giving this opportunity for allowing her to show her total talents. This is the Cleopatra that you would dream of, full of the playfulness, sorrow and a glorious amount of passion that probably leaves more than Mark Antony falling for her. It is a star turn and I am so glad that the opportunity for me to see it has finally arrived.

However this play isn't all about the characters on the play header, there is much more fun to be had. However much of this really does come from the casting, with the ladies having great fun in their manly roles. High honours for butchness (if I can make this comment delicately) probably go to Jen Kenny as Dercetus and Maggie Holland's Agrippa, while not having huge scenes, they add much to those they are in. Nicola Osborne is also as always a safe pair of hands as Antony's right hand Enobarbus.

From the men, Edward Toone is very effective as Octavius, clearly displaying his ruthless ambition for power and success and more than willing to selloff his sister, Octavia (Beverly Webster) for further political gain. Michael Street also is clearly having fun in the role of Alexas (when he is not rather effectively being beaten by Cleopatra, scary Bernie point), and while he has a limited amount to do, Kevin Pinks could perhaps not have better been cast as the comic foil of Mardian.

As for the play itself, I did find it a little processional during the first act, with a lot of enter left, exit left, enter right, exit right going on, and the first half is tremendously wordy and limited in action, indeed most action of the whole play is often unseen, with casual sword noises, and screams from whipping (poor Julia Langley!). However the second half makes it all worthwhile with the pace upping significantly. I suspect also that I am more than happy for the number of wise edits that the director rightfully made.

Directorial successes for me all come in the second half once the pace has picked up, and I have to say that I really loved the cleverly depicted death scenes, it was clear from the set that we were to get more at some point and coupled with the great use of lighting and music, proves a very effective and well played out idea.

I always say during these reviews that longtime readers will be aware of my love hate relationship with Shakespeare, and often it is only the innovations that get me through. As someone else remarked on the evening I saw it, "I didn't really understand a word of it but I enjoyed it" to paraphrase slightly. I am onboard with that, I tend to enjoy the ride more if it is done with a little flair and not a stale 400-year-old retelling. Antony & Cleopatra from Masque Theatre does that with an epic feast of a cast from so many groups in the town all bringing a little more life into the whole piece, but hopefully keeping them old purists happy as well.

Masque has a website for details of upcoming shows at http://www.masquetheatre.co.uk/ 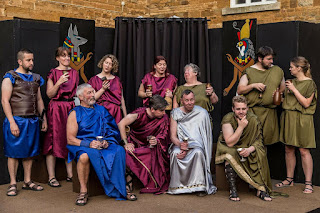