Review of Go Down Swinging - A Rehearsed Reading at Royal & Derngate (Underground), Northampton

June 25, 2017
I found myself picked out and targeted on Twitter as to whether I would be available and like to see this very first reading of new play Go Down Swinging. Happily, as it turns out it was my free night as this was a truly excellent night, with both an impressive new play and an equally great post-show discussion (almost an hour!). I remained silent as is my tradition at the discussion, I am a writer, not a talker and like to sleep on thoughts as well about shows before putting fingers to keyboard.

Go Down Swinging is a loose telling of the true story of Venezuelan world champion boxer Edwin Valero, a man of both successes but one troubled in life outside the ring resulting in it being very short. This play transfers the setting to the UK and Valero has become boxer Karl Johnson (played in this reading by writer Dan McGarry).

This at its heart is a play about domestic violence, although it's neat trick is that throughout it remains very ambiguous in this, leaving the audience (or indeed actors) to interpret the very unclear script. If using the word unclear seems unfair and immediately critical, it is not meant to be. Go Down Swinging is very much a play which allows the viewer to make up their mind as they leave the theatre. That isn't suggesting that it is lazy storytelling making the audience do all the work, more that it invigorates the mind and courts discussion (as the post-show part clearly demonstrated). Having seen a heck of a lot of plays now I was truly impressed by the way it didn't force the issue while stirring thought through the true motives of the characters and highlighting the serious issue all the same.

It is true that there is a terrible area of suggestion upon the characters which was brought up in the discussion, all three of the boxers are suggested to be abusers, and even if in your mind you decide some are not, the seed is planted, so it is a tad stereotypical of the world of boxing that they cannot control their fists beyond the ring. The stats don't prove this, it is just the thought that the pursuit of violence through a career breeds it. So yes, maybe a good man (other than Jimmy) is needed in this play to balance it out.

The format of this play is one of remarkable timeshifting and while some present clearly had an issue with keeping pace with it, I found it truly stirring as a piece because of this. As another said, to make it an A to B drama would have felt very stagnant and boring. For me, the switches are solid and clear and yes, the switch at death made sense to me as well. However having said that, I think despite the writer deciding on not doing costume switches for time shifts, perhaps something like lighting could be an effective solution?

While this wasn't about performance and more the judgement of a new play, I have to also say that even as just a rehearsed reading (the cast meeting from just 11am on the day), it was also very well performed and presented. Opening with a great little scene featuring local boxers setting the story which came slightly unexpected having seen some readings before (just sitting on stalls script in hand). It was clear that more effort than most had been made to present this in a professional if still a slightly embryonic form.

The actors obviously are the big part of creating these brand new characters and offer their own insights into the motives and relationships they have. These much like some of the storytelling are also intriguingly ambiguous, with hints of the relationships that may or may not be truly happening.

So at this very first glance of Go Down Swinging, the prospects are extremely good. You could perhaps go a long way to find a play that has so many open ends of emotion and storytelling, offering a kind of make you own adventure path, where the story forms quite a bit within your head rather than on the stage in front of you. For some perhaps this might be a turn-off, as the time-shifting elements might be also. However, for myself it is refreshing not to have everything handed to you on a plate during a play, life is not always simple and in real life what one person says to you they might not mean and for me Go Down Swinging offers that kind of situation in play form. A truly promising piece which I hope to be able to follow into the future.

Go Down Swinging is a Standing 8 Theatre Company production written and directed by Dan McGarry and is currently under development. Further details on Facebook at https://www.facebook.com/standing8theatre/ 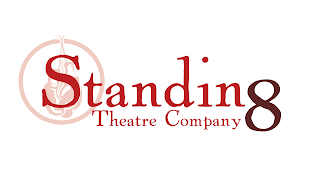