December 12, 2016
At the end of a week where I was slightly disappointed with a production which had been a past Tony Award nominee for best play, I found myself at Duston for the very differently graded Little Red Riding Hood pantomime.

There is no comparison of course, despite my disappointment and reservations, that play not only surpasses Red Riding Hood in performance levels, technicals and well pretty much everything. However it did generate a great deal of thought over a reviewers roles in the so called "entertainment" aspect. Despite Peter And The Starcatcher (for that of course is the play in question) being an exceptional achievement in production and performance, just lacking in the material aspect, I do wonder whether the audience at Red Riding Hood were actually having a better time.

Like last years Sinbad The Sailor, this is written once again by the mysterious Mr Johnathan Freeth, who it seems is quite a dab hand at this pantomime writing lack. He certainly knows what the audience requires of a panto, as Little Red is like the ultimate checklist. You have sweets chucked with alarming abandon into the audience (Imelda Staunton may not approve the consumption that follows); you have "he's behind you", "of yes we/you are" etc; we have the baddie to boo; we have the over the top dame; and we have the sing-along at the end (which despite being close to the emergency exit, I stayed for). It is, for love or hate panto, absolutely all there. The balance, unlike one of last years professional shows, is perfectly correct for adult content as well. Mix in a bit of surprisingly edgy political content featuring Brexit, MP Mackintosh and Trump, and you have actually, even for myself not a big fame of pantos, a very impressive show.

This being the true epitome of "community" theatre, there are a vast collection of acting abilities on display. However with pantos, this truly doesn't really matter, as a polished panto probably actually makes a pretty dull one, and no one would question the effort of all those involved. There are however some really nice performances all the same. Some of the children are bold as brass in their smaller roles and I am sure a few are lightly to trend the boards a few times in the future.

From the grown-ups, Alistair Way has tremendous fun as the the Big Bad Wolf, who despite being saddled with a onesie adds surprising character to the role. Also full of fun as the Dame is Gavin Key, looking the part, sounding the part, and really obviously having great fun with it as well.

Perhaps the best performance though lies at the hands of James Burgess as the scenery chewing baddie Mayor Culper. He perfects the tone of voice and maintains throughout, including during the singing. Really a very impressive performance.

As in Sinbad last year, the music is an interesting mix, mostly seventies and eighties with a bit of I don't know what modern thrown in, and the cast perform them with surprising gusto including a few solos and duets of some repute.

Director John Myhill has created something that all boils down into something remarkably fun and is greatly recognised as such by the buzzing audience on the day. So while there will be no awards laid at the door of Riding Hood, that doesn't stop it being really great entertainment for a good two hours plus. Optimum quality of deliverance does not always translate into quite as much fun as this provided. 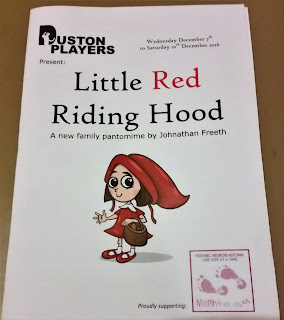