Review of Broken by Motionhouse at The Castle Theatre, Wellingborough

March 01, 2016
When I first investigated Motionhouse's Broken via its vivid trailer, it felt as if it could offer some fascinating stage work familiar to that of Frantic Assembly, which I truly wanted to see more of. Therefore I found myself in the main theatre at Wellingborough for the very first time last week to see what was going to be quite a show.

The first thing to say is that Motionhouse is in reality a very different beast to the work of Frantic Assemby, happily plowing its own rich reserves of contemporary dance, where as Frantic builds a story around physical motion. What artistic director Kevin Finnan brings to the stage is a world travelling a path of early human evolution through to a potential collapse as we reach at the end a cataclysmic event. Well that is what it feels like, as much like a painting, the audience might get many feelings and emotions from the scenes depicted. In the early cave scenes we appear to have dancing amoebas as life begins. Then we progress through to cavemen and strange apparitions, including some impressive stilt work. Finally we have a domestic situation in a block of flats which carries us into a quite spectacular visual feast of a conclusion.

The performers Martina Bussi, Daniel Connor, Junior Cunningham, Alasdair Stewart, Naomi Tadevossian and Rebecca Williams are never short of stunning as they show tremendous strength and emotion through their dance. Seeing some of them after the show is quite a revelation as they are so surprisingly small in person. Dancers have quite an amazing way to appear to have such strength through apparently minimal visual effort, bringing a wonderful delicate touch. This is what makes the whole thing so tender. It is without doubt a remarkable ability.

Technically and aurally the show is an equally amazing prospect. Pumping and dynamic music from Sophy Smith and Tim Dickinson combines wonderfully with Logela Multimedia's work on the imagery. The dancers magically timing their arrival and departures in tune with the vast projections. I also loved the way the lighting during the cave scene managed to play wonderful giant shadows across the side of the theatre.

So an absolute delight of a show, which may have at times suffered from a couple of the sequences being slightly over long. However it builds with every scene adding more technical advances and finishes with a simply stunning piece. Very highly recommended.

For details about The Castle see their website at http://thecastle.org.uk/ 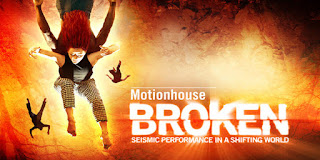