November 08, 2015
I first got the opportunity to see these now third year actors at the Holy Sepulchre in March 2014 and even at that time, as first years, their heavily choreographed movement work and delivery of the words of John Donne showed huge potential. Fast forward to June this year and the levels of skill were developing at an exponential rate as before my eyes they made my nemesis Shakespeare very, very watchable with their Winter's Tale and Merry Wives performances.

Now a full twenty months after I first saw them they have presented perhaps the very best of the Northampton University shows I have seen to date and there have been many exceptional ones believe me. What Orientation did for me that was a delight that I have not always seen from the University productions is that as a concept it kept it simple. We are in a highly competitive office with a group of workers, basically amounting to a dysfunctional family, who find themselves not only snowbound in the office but also in some sort of ultra modern Agatha Christie concoction.

Yes there is a clever story structure going on, but it never overwhelms the casts opportunity to create such perfectly formed characters that in the two hours the audience instantly recognises and learns to love or hate them as required. Orientation is without doubt the most perfect of plays for actors to get their teeth into and for the students this is just ideal.

From our arrival we are very much in the office environment. In the minutes leading to the start of the show a bored cleaner (Matilda Hunt) moves papers, mops the floor and generally looks miserable. It sets the scene perfectly as does her opening solo speech. Soon however the floor in swiftly filled as the bosses Daniel Gray and Suzannah Cassels welcome us the audience as new members of this team.

The team themselves all get a moment in the spotlight as they arrive to the workspace and are introduced to us by Gray and Cassels. It's a clever idea and even in those brief moments the cast make the characters their own in either speech or movement. The beginning of fully fleshed characters was already happening.

After his bold magnificent Falstaff in Merry Wives, Stuart Warren again was a dominating presence and his later exchange with the long suffering Rory Sayers was a particular favourite moment. Sayers himself captured the role of the under the thumb character perfectly, although it is a mystery to this moment how he and the frankly horrible Sophie-Rose Darby got together in the first place. Her later fate was good for Sayers, but Warren's poignant moment of his seeing her differently was a lovely moment. Although how you could see her different I have not a clue.

I absolutely loved Lucy Kitson and Jaryd Headley as the lovers in the lift. They in particular had two wonderful scenes together that were inspired. The first where they cleverly created conversations from afar was very funny and delivered perfectly. Also the later scene on the roof, where it was clear Headley didn't have the moves, but Kitson certainly did.

Some of the moves in question were those of Amy "Don't look into her eyes" Weaver and one of her moments of premonition that foretold of death. Kitson in her drunken state replicating this was just brill. I also loved that scene towards the end where Weaver, in the most perfect penguin costume twerked away to raise the spirits of Ellen Shersby-Wignall.

Shersby-Wignall was superb as the quiet penguin lover and didn't deserve what was to happen to her at the hands of Patrick Morgan (Kevin, being afflicted with a name could easily drive you to murder). Morgan himself created a truly odd-ball and strange character (it was like looking in a mirror ;) ) that was truly creepy even to begin with, before the development of the story told us even more.

Certainly not oddball but wonderfully cute was Amber Mae's portrayal of the near mute Heather; patrolling the corridors carrying paperwork, moving in the most bizarrely wonderful way and spontaneously placing herself into a group hug at any opportunity. Her break from silence and into song at the karaoke was just magic.

Less cute was Jack Alexander's manipulative character, constantly driving characters into one another. There was however a possibly uplifting moment for his character at the end though in his conversation with Weaver that hinted that in reality he wasn't all bad.

Two victims of Alexander's character though were Connor McAvoy and Caroline Avis' Bev. The former a clumsy "bad person" who after finding out about Bev's daughters death, manages comically to never manage to have a conversation without bringing the subject up. Avis herself portrays Bev with huge character and her final exchange (I had guessed that her conversation partner was dead, but I admit it didn't click who she was) suitably brings a lump to the throat.

Great value also are Neizan Fernandez Birchwood and his temp (in every sense) lover Nicole (Daniel Hadjivarnava). The latter throwing himself into the role and his dress wonderfully and both getting full on in their roof top scene. Bold and wonderful. Cíara Goldsberry is also bold and a little brash as the office DJ, while Megan Burda cuts a suitably aggrieved figure as the dead Leanne.

Finally we have the two wonderful security partners Stella (Emma Smyth) and Scott (Tom Stone) who are thrown into going above and beyond the call of eight pounds an hour in their investigation of a rising body count.

So the complete package of magnificent actors in training under the superb work of director Tom Brennan. Magical music (although hearing Whigfield for the second day running was a little scary) with superbly worked dance routines. Excellent movement creating both a busy office environment and those absolutely wonderful slow motion dance movements (Alexander was particularly giving it some I noted). Freeze frame moments for the cast in some tremendously awkward postures as well all went together to create the most pleasing show on the eye.

The bar has been raised so high, I look forward to Unknown in December trying to straddle it. No pressure, but I know really that those in that show will put everything into reaching it. A simply stunning show that thrilled me from start to finish.

Orientation was performed between Wednesday, 4th November and Saturday, 7th November, 2015
Twitter feed for the University actors is @BA_Actors

The second group of third year actors will perform Unknown between the 9th and 12th of December at Isham Dark. 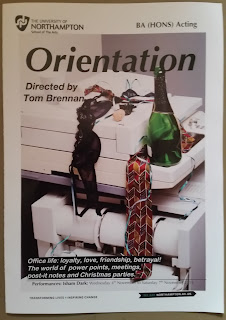 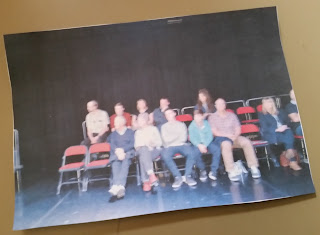