Review of A Tired Heart & The Big C by Tony Klinger at The Castle Theatre (Studio), Wellingborough

October 04, 2015
It is a strange but honoured circumstance perhaps to find such a play by a name as Tony Klinger debuting in the compact Castle Theatre studio space in Wellingborough. However despite Mr Klinger's name being a recognisable one in the world of film making and more recently on the bookshelf, A Tired Heart & The Big C is the first play to come from the film industry stalwart.

A Tired Heart is described by the author himself as an "outpouring of emotions" formed from a series of life events that he has had. Lead character is Stuart Wagner (Steve While) who in the first scene sees the death of his father Sam (Will Adams), killed by a so-called tired heart. It is no real spoiler and totally impossible to avoid the fact in this review that Sam does not leave Stuart forever, as spruced up in white suit he remains a reoccurring presence. Following the death of Sam, the story unfolds via the funeral arrangements and financial fallout surrounding his death and as the title suggests an encounter for the family with cancer.

Add to the mix the rest of the strongly Jewish Wagner family and you have a delightfully strong mixture of characters. This is indeed the plays strong point, as the characterisation is excellent. We have the understandably emotional wife of Sam, Helen (Sue Whyte) who frequently tells all "I might as well be dead". Then the younger sister of Stuart, Lynda (Jessie Waterfield) and her hypochondriac husband Paul (Benji Dotan). We also have the quietly manipulative wife of Stuart, Jenny (Diane Wyman) and their gentle daughter Alison (Lauren Jones) and finally the sister of Sam, Aunty Jessie (Mo Shapiro). Put together you have the perfect dysfunctional and bickering family.

The actors all offer great performances and with several of them amateurs a huge credit to their dedication. Steve While holds the whole framework of the play together with his highly emotional performance. The weight of both his family and indeed the business heavily showing on his shoulders. There is a wonderful telling line "I eat stress" from Stuart in the second act which shows very much the like father like son principle.

As the "losing the will to live" Sam, Will Adams is superb and has the best lines of the play. Flitting in and out to offer Stuart helpful advice, which he is not always keen to accept, "What are you? The f**king Greek chorus?" spitting at him at one point. The character of Sam is indeed one of the strongest and he is sorely missed in the second act where he rarely appears.

Jessie Waterfield and Diane Wyman have great fun as the bickering Lynda and Jenny, while Sue Whyte has all the authority and domineering presence as matriarch Helen. My favourites of the smaller roles include Lauren Jones as Alison, who provides a wonderfully sweet performance, especially in her eulogy at her grandfather's funeral. Also superb is Benji Dotan as Paul, a hugely comic performance, and one of those actors that I love on stage where he is never not performing. Some would say things like his trouble with that burnt bun could be a distraction, but for me it just provides proof the actor is living the character, and he was quite brilliant.

For all the successes of the play, the staging was less so. The studio space is compact and some of the requirements for set changes were a little excessive for what could be achieved cleanly. Not to say it isn't a credit to the actors in what they did, I just felt that there was too much sometimes and it did at times break the flow of the play quite severely. There were though occassionally lovely flourishes to the set changes, I particularly liked the idea of the placing down of the chairs to time.

So what we have is an insightful character led play with some fun comic set pieces and a simply superb and thought provoking end speech by Stuart. For me as delightful as the extra ending was performed, that speech was simply too good not to be the very end of the play. Wherever this play may now be heading, I suspect it will provide some stirring thoughts in those that get to see it, because the subjects held within it will touch everyone's heart in someway.

A Tired Heart & The Big C was performed at the Castle Theatre (studio space), Wellingborough on Friday 2nd and Saturday 3rd October, 2015. 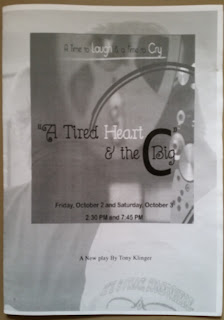