Review of Cat On A Hot Tin Roof at Royal & Derngate (Royal), Northampton

October 09, 2014
THIS REVIEW WAS ORIGINALLY WRITTEN FOR THE PUBLIC REVIEWS 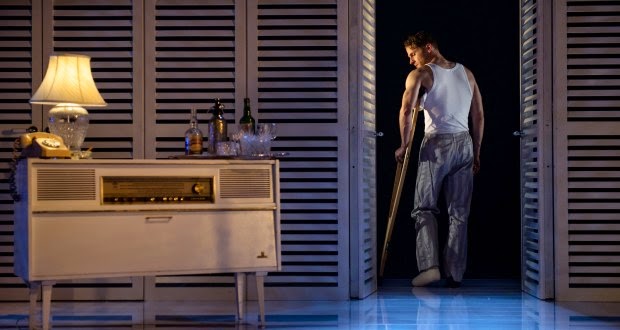 First performed in 1955, Cat On A Hot Tin Roof and prestigious winner of the Pulitzer Prize for Drama, is widely regarded as Tennessee Williams’ finest play. Indeed by many one of the best of the twentieth century.

Telling the story of the strife of a family including husband Brick (Charles Aitken) and  his wife Maggie (Mariah Gale). Set during a party (in a bedroom!) to celebrate Big Daddy’s 65th birthday, family riffs, sickness and hidden desires bring the dynasty to a head on one alcohol fuelled evening where all emotions are laid bare.

The play clearly fails to try to win its audience over with the first fifteen minutes or so, as introduced to the characters of Brick and Maggie in their stifling (not just for them) bedroom we are treated to, what is in effect a one person conversation. The maudlin Maggie rarely provides any humour during her one way conversation with her unloving husband Brick ‘Did you say something dear?’. This is a scene setter, albeit a long one, for what is to come. It is also a greater challenge due to Gale, who as Maggie, has perhaps tried a little to hard on her southern drawl. Maybe to an expert, it is a perfect representative of the accent. However on stage it provides quite a challenge on occasions to clearly understand. Despite this Gale (a highly experienced RSC actor) does present a very fine performance of the unloved wife.

Charles Aitken as Brick, who is rarely off stage, is the opposite of Gale, having that classic American twang but never awkward to understand at any point. During his opening scene with Maggie he portrays well the put upon husband, rarely speaking and with his own hidden emotional feelings. Saying little, where Maggie says all. It is only at that true retaliation of raised voice that he breaks out the hidden emotions beneath, Aitken is quite superb throughout. His scene at the start of act two with Big Daddy is the best of the play and reveals everything about his character.

Playing Big Daddy is Terence Wilton, reading the role, script in hand for the sick Daragh O’Malley. However the “reading the role” phrase is cruel to use as he is excellent and rarely do you notice the script at all (except for my innate concern of it becoming alight on the birthday candles!). He clearly has the most interesting character to play with the best lines of the play (including the funniest) and also his exchange with Big Mama (Kim Criswell) is raw, powerful and at times uncomfortable to watch. The best however is indeed with Aitken, breaking open Brick’s emotions for his late friend Skipper and contorting nimbly in wrestling with Brick's crutch (while juggling with the script). When the glass flies, the audience truly feels the heat of the passion.

The lesser roles are all also excellently played, with Criswell overplayed as Big Mama but in a very good way. Over the top, loud, and glammed up to the eyeballs. Sean Murray in the slight role of Reverend Tooker is also a delight and delivers the ‘I think I better slip away at this point’ line with glorious, crowd pleasing humour.

The music, although much heralded as written by Charles Cave of White Lies is rarely present/audible (perhaps deliberate) except the impressive introduction. Much more of a delight is the work of Richard Howell on lighting and Emma Laxton on sound as they provide the gentle sounds and feel of the environment subtly and the relevant abrupt flashes of the party fireworks excellently.

Designer Mike Britton, nominated for his work on this years Royal & Derngate’s A Tale Of Two Cities by the UK Theatre Awards, provides an at first simple single room set. However through its stark and tremendous whiteness it provides a superb background for the story to play out to. The centre piece is clearly the large and stunning chandelier, as Big Daddy says via “a fire sale in ”. Director James Dacre also uses the set superbly with clever use of the slatted walls to herald the arriving and passing characters. It also provides the abiding image from the play of Brick, back centre stage and back to audience, crutch and glass in hand framed between the two double height doors, a splendid visual moment.

This is a mighty fine bourbon of a production, bringing the classic alive once again and one which is definitely worth catching if you get the chance.